Condom Love: Find Out How Amazing Safer Sex Can Be 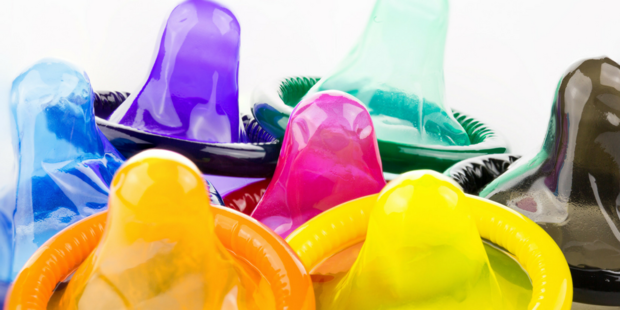 If you think condoms aren’t for you, you just haven’t found the right one yet.

Do you love-to-hate condoms? Are you sleeping with a partner who is a condom foe?  This article just might be for you.

You see, everyone is told to use condoms. But very, very few are taught how to choose condoms. Read on for three things you should know about that, and visit your nearest The Right Time health center, where they stock all methods of contraception and offer free or low-cost contraception to those who need it.

Little-known fact: condom size is the most critical factor in increasing safety and pleasure with condoms.

Have you ever worn a bra that didn’t fit right? Whether you endured straps digging into your shoulders, relentless underwire stabbings or cups that bunched up, you understand that an ill-fitting bra is at best distracting and at worst downright painful.

Just like a perfect-fitting bra, a well-fitting condom will take your (and your partner’s) mind off of the condom and onto giving and receiving pleasure.

Smaller condoms are the best option for 35% of men. If you have ever had sex and the condom slipped around or came off inside of you (and yes, that does happen)—or if your partner’s chief complaint is that wearing condoms feels like a paper bag—that partner probably should switch to using a smaller-than-standard condom.

PRO-TIP: If your partner would benefit from a slightly-smaller-than-standard condom yet doesn’t need a true “small condom,” there are a few excellent Japanese condoms that are simply narrower than standard condoms. These include some of the thinnest condoms on the market—so there will be very little getting between you and your partner.

Standard condoms are the best option for 50% of men. If your partner is in this category, you’ll have a wealth of condoms from around the world to choose from. That includes lots of premium options that are likely superior to anything you’ve tried before.

PRO-TIP: It’s good to be aware that there are also a number of between-size condom options available—for example Kimono Microthin Large—that bridge the gap between “standard” and “large” size condoms.

2. Shapes, and materials, and flavors…Oh my!

Getting a general idea on what condom size you need to buy is just the beginning. Just as not every bra in your size is equally comfortable, not all condoms in the same size range will feel the same. And while you may have a go-to bra for when you want comfort and something sexier for a night out, some condom users switch up shape, texture and flavor to match their mood.

Many use and like high-quality lubrication. However, there are many lube myths.

Do you think you need to be a certain age to use lube? You don’t! Are you afraid that using lube might mean that there’s something wrong with your sex life? Really, nothing could be further from the truth!

For condom users, extra lube has some benefits. Simply put, exposing your most delicate parts to latex will dry you up—no matter how excited you may be. A study that looked at people’s arousal levels with and without condoms found that men who used a condom without lube were slightly less aroused than those who didn’t use a condom or lube. The kicker? The men who used a condom with lube got as aroused as those who didn’t use a condom at all! And provided you are using a high-quality, condom-compatible lubricant, your condom is less likely to break during intercourse.

It’s time to declare your days of suffering through mediocre experiences with condoms officially over. Your sex life will thank you.

Melissa White is the CEO & Founder of Lucky Bloke, a site committed to making it easier for couples to find condoms they love to use.